Ler - An RSS Aggregator for Android!

I have been working on a RSS aggregator app called Ler. Its available for Android, and you should give it a try! It is the first app I design, develop and publish all by myself, so I am pretty proud of that! 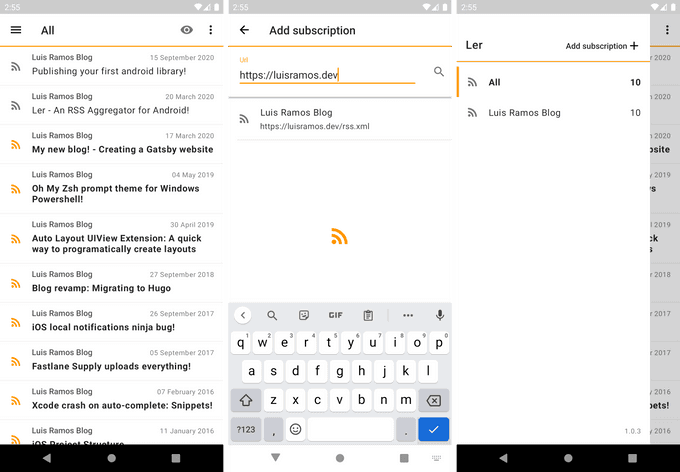 I know what you are thinking, another RSS feed app? Aren't there billions of them? Well, yes. But this one is mine. And I have plans. Big plans! Let me tell you how it came to be, and what I want to do with it.

So I looked into Googles digital well-being app, and turned on a 30 minute timeout for Twitter. And it works! Some days, I don't even reach the timeout. Unfortunately, this also meant that a lot of the blogs I read wouldn't reach me as well.

And there you have it. I took the time I was wasting and built this app!

The app name is the portuguese word for reading. I did a search and it seems nobody claimed it, so why not? The main features that I have built so far:

Articles currently open in the browser. I toyed with the idea of having a built in reader, but that seemed overkill for what I wanted to do. I already used the browser to do most of my reading anyway.

I am pretty proud of how it turned out, despite not being great at UI design, I kept it simple and it does the job! I have been using it for the past couple of weeks, and I think I impressed myself by actually using it instead of defaulting to Twitter as a time killer.

Open so everyone can read it

Not only am I using this app to avoid using twitter all the time, I will also use it as a showcase project. Hence, my plan in the next weeks is to write a bunch of tests, clean up the folder structure, and open source it.

So far, I have not worked in an app that had their source open, so most often when talking about my work I can't provide examples. I applied all my knowledge and tried to build the simplest app I could, while still being a good example of how I would build an app.

My plan is to also write about android development, while using the app as an example. I made some architecture choices that I can talk about, since I haven't found a lot of written examples online.

Please give it a spin, and let me know what you think! You can tweet at me or send me an email. I have a little roadmap with more features, but let me know if you want a particular feature added, and I will add it to the list!

Please get in touch if you have a suggestion, find an issue or want to say hello.